It might sound like old news to those of us used to hearing such doom-laden pronouncements about our interpersonal relationships in the modern world. But it takes on an interesting twist when you think about it from the perspective of a brand whose entire business depends on the ability to create intimacy – namely, a condom brand.

Heper and Pasini got up on the Healthcare Insights Stage at Cannes this week to talk about authentic brand messaging and marketing to millennials in a ‘post-truth’ world, and how they launched a campaign to “save intimacy” and promote premium, non-latex condom brand SKYN Condoms. 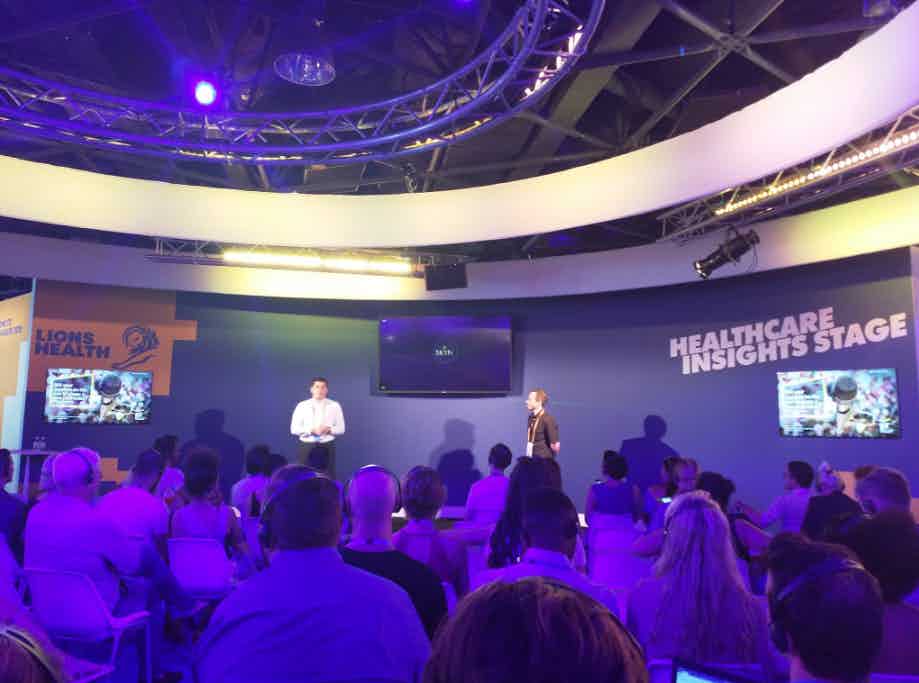 Marketing to a disconnected generation

Pasini noted that one of the biggest changes we see in the world today is the way that experiences which traditionally took place in the outside world have moved inside the home. “Instead of live music, we have Spotify; instead of going to the theatre to see a movie, we have Netflix,” he said.

While I would argue that being able to play music and film recordings far predate Spotify and Netflix, it’s true that we have access to richer and more varied experiences at home than ever before. And when the most meaningful experiences are taking place at home, Pasini asked, how can brands be part of that intimate world?

For a condom brand, you might think that being present in the home is a pretty easy feat, and it’s true that there are some bright spots on the horizon – in the UK, the penetration rate (pun intended) of sex toys in the home has overtaken that of dishwashers.

But there are some challenging statistics, too. The majority of SKYN Condoms’ customer base is made up of young people aged 19 to 36, otherwise known as the millennial generation. Our generation, said Pasini, is prone to bailing out, leaving out and zoning out.

Bailing out – 80% of millennials have reportedly been “ghosted” (where the other person abruptly disappears) by someone they were dating, according to a survey by PlentyOfFish.

Leaving out – the millennial generation is having less sex than previous generations, according to research published in the journal Archives of Sexual Behavior.

Zoning out – 4 in 10 women reportedly prefer pleasuring themselves alone to having sex with a partner. 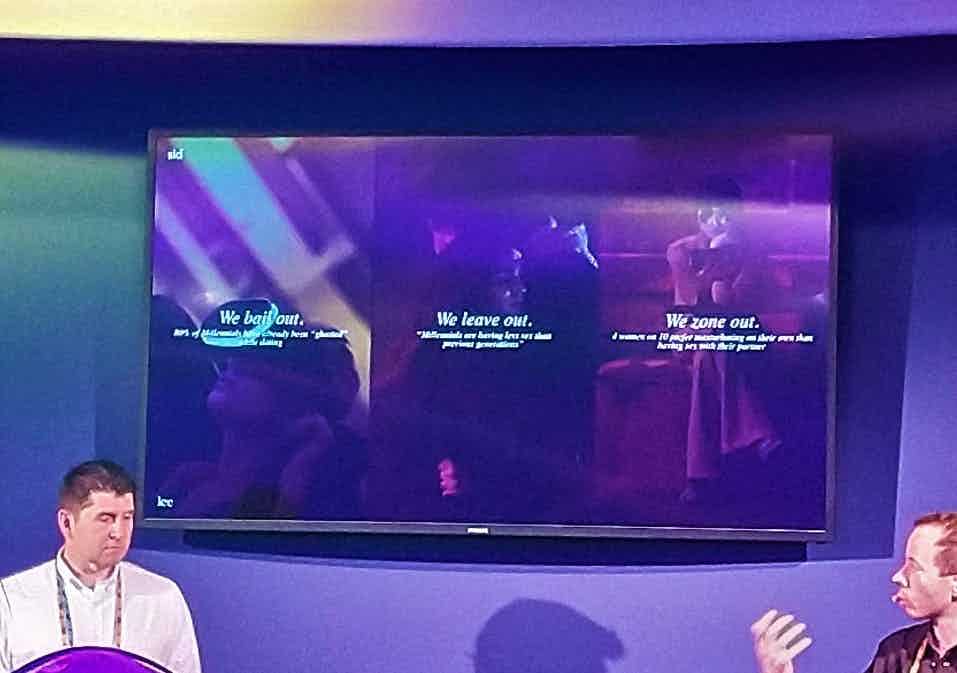 How does SKYN Condoms tackle the challenge of marketing to a demographic that is increasingly disconnected from sexual intimacy? According to Heper, part of the magic is in their slogan, “Feel Everything”.

The slogan is a reference to the material SKYN’s condoms are made with, which is a unique, non-latex substance designed to allow you to “feel everything”. But for millennials, said Heper, “it’s also a liberating message”.

Heper and Pasini then showed the audience three marketing campaigns SKYN has run which were designed to capture the attention of their intimacy-averse, technological, sexually progressive target demographic.

The first was a video that anchors SKYN Condoms’ new multi-national digital and social campaign, ‘Save Intimacy’, which was launched earlier this month. Created with Sid Lee Paris and directed by Terence Neale, the video depicts an eerie, dystopian future where young people are shown to forgo personal interaction in favour of technology:

Despite its dire imagery, SKYN’s film doesn’t reject technology outright – the brand no doubt knew that its message would be instantly rejected by its audience if it did. Instead, the short video concludes with the message, “Technology is wonderful – when it brings us together”.

The press release which accompanied the launch of SKYN’s campaign played on the ‘technology’ that makes up SKYN’s non-latex condoms, calling it, “A technological revolution welcome in the bedroom – one designed to make you feel everything and get closer to your partner.”

SKYN’s campaign thus sets up two opposing visions of technology: one in which technology keeps us at arms’ length, feeling nothing; and the other in which technology allows us to “feel everything”. The brand is clear about which one it thinks its audience should choose.

In November 2017, Australia held a historic referendum on equal marriage in which its citizens were given the opportunity to say ‘Yes’ or ‘No’ to legislating marriage equality. SKYN Condoms seized on the opportunity to create a tie-in campaign in one of its biggest markets – SKYN has more than 70% share of the condom market in Australia.

In a 20-second video produced by SKYN and Sid Lee, supporters of marriage equality cry “Yes!” to the camera, in cuts that get progressively faster as they build to a triumphant climax.

After 61.6% of voters cast their votes in favour of equal marriage, SKYN celebrated by offering a corresponding 61.6% discount on all its products. The resulting surge in traffic to SKYN’s online store completely crashed its website – which Heper and Pasini counted as a win.

By far, SKYN’s most elaborate recent campaign has been ‘Places of Intimacy’, a marketing campaign launched last year which set out to promote a message of sexual adventurousness and finding “love everywhere”.

The campaign was targeted at “serial monogamists”, a group which SKYN describes as, “millennials who seek intimacy as a means of forming deeper human connection”.

Pasini explained that the campaign was built around the notion that intimate memories are intrinsically linked to the places in which they’re formed. To illustrate this idea, SKYN held a contest to find 12 couples with strong sexual chemistry, who were then sent out to experience some of the most intimate locations around the world, and write about their exploits.

In the end, 30 winning locations were selected as the most intimate locations in the world for couples to visit. SKYN, working in partnership with GQ, compiled the stories from these locations into a coffee table booklet (which was also handed out to attendees at the Cannes Lions panel).

The takeaway? Be authentic

Heper and Pasini’s message to brands, above all brands looking to market to millennials, was this: be authentic.

“Authenticity is the most important thing in the world today,” said Pasini. Millennials in particular “can smell fake from a mile away.”

We’re living in a ‘post-truth’ world, he stated – which in marketing terms apparently means that consumers will follow their gut feeling about a brand rather than what they are told, and frequently make up their minds based on recommendations from their friends.

Eighty-four percent of millennials reportedly don’t trust traditional advertising, while 92% of consumers in all age groups trust recommendations from people they know above other forms of advertising. According to Pasini, these are the two major obstacles for brands in the world of ‘post-truth’ and authenticity.

SKYN Condoms’ approach to this problem has been twofold: firstly, to “invite millennials into the journey”, by creating campaigns that they can relate to and feel a part of.

And secondly, to be completely unapologetic about who they are as a brand. As Heper said, “We do what we do, and we don’t exaggerate.” 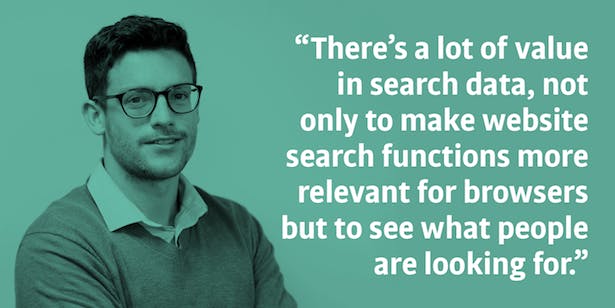 Matt Lamb is head of ecommerce for Castle Galleries.

Is it all wine and canapés, just another ecommerce job, or somewhere in between? Here’s Matt to tell us more…

We’ve all been there. The team have put together the monthly stats report. The numbers are all going in the right direction. In fact, since you started working with the client, results have been fantastic.

High fives all round. Head to the pub for much backslapping and a celebratory pint. 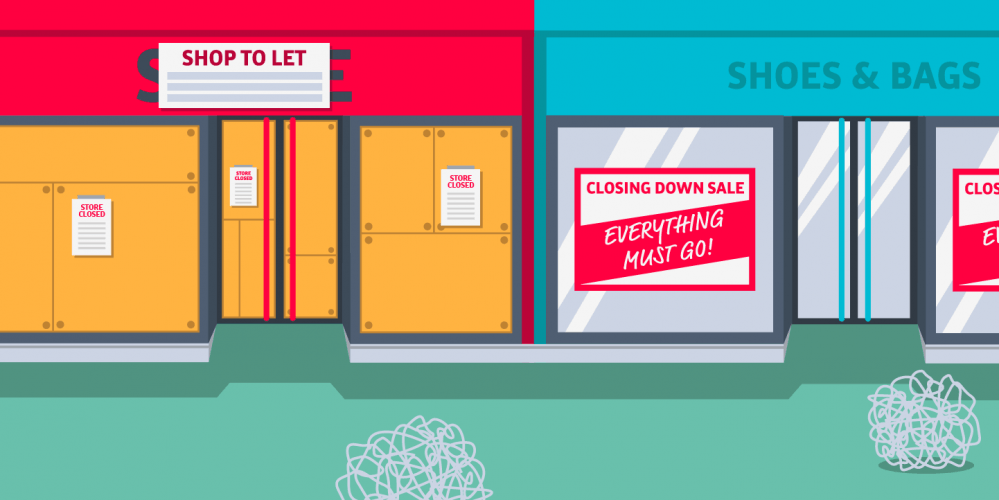 News headlines in 2018 have been full of woe for UK high street retailers.

A few days ago, House of Fraser became the latest high street name to seek a Company Voluntary Arrangement (CVA), a type of insolvency process which will see 31 of its stores closed and some 6,000 jobs cut in a bid to save the struggling business.