This might sound surprising considering that ecommerce has been the only option for consumers (in the absence of brick-and-mortar retail). But given the wider implications of the pandemic – including dramatic lifestyle changes and financial insecurity – the lack of demand is certainly understandable.

Is discounting the reason for recovery in April?

Nosto reported a 30% fall in online fashion sales during March. Meanwhile, ONS states that online clothing sales were down 16.1% in March compared to February.

However, new data reveals some signs of recovery. Based on the analysis of 271 online fashion retailers from the UK, US, Germany, France and Sweden, Nosto found a 21% year-on-year increase in ecommerce sales during April. In addition to this, it found that year-on-year website visits grew 9%, orders grew 30%, and the average conversion rate increased 12%.

This does sound like positive news, however, heavy discounting from retailers could be the main reason behind the rise. This could also explain why, according to Nosto, there has simultaneously been a 3% drop in average order value, with consumers seemingly lured into buying clothing at a reduced cost.

Luxury brands are discounting, too

It’s certainly true that the majority of online fashion retailers have resorted to heavy discounting throughout the past month, with even premium brands such as Nike and Ralph Lauren extending their spring sales. Going forward, discounting is likely to remain a big part of strategy for many within fashion ecommerce. This even extends to luxury brands, who are already using it as a way to combat excess inventory. According to retail analyst Krista Corrigan, the proportion of luxury goods discounted at the end of March was up 29% on the previous year, which is a clear indication of high levels of unsold stock. Net-A-Porter had 30% of its stock discounted as of March 25th, compared to less than 1% at the same time in 2019.

While it is a problem for many retailers, unsold stock could provide digital marketplaces with a timely opportunity. According to McKinsey’s State of Fashion 2020 report, “premium discount retailers with effective merchandising and strong customer service, like The Outnet and Yoox online, will become mainstream by offering discreet and large-scale avenues for excess stock disposal.” However, the report also urges fashion retailers to proceed with caution when it comes to this type of discounting, as relying on ‘off-price’ stores can be detrimental to a brand’s image and profit margins if off-price sales end up cannibalising full-priced and new items.

This is not necessarily a major concern for retailers given the current circumstances, and for marketplaces, taking on additional brands can certainly be valuable. Zalando is one ecommerce retailer that has already capitalised on this, having taken the decision to allow partner brands and businesses access to the Zalando ecommerce platform during the coronavirus pandemic. This is part of the company’s aim to accelerate its platform strategy, which gives partners greater access to Zalando’s 32 million customers. The scheme also offers greater visibility for small to midsize retailers on the platform, and until 31st May, commission fees are omitted for those in the Connected Retail program.

Zalando saw a sales surge of more than 100% over Easter compared to the same time last year, with bricks-and-mortar retailers selling 35,000 items on Zalando during the four-day weekend.

Co-CEO Rubin Ritter: “For the fashion industry, the time to go online is now” – #Zalando to expand platform business to support brands during the coronavirus crisis #platform #ZAL #ecommercehttps://t.co/HzF63YXz1G

Next, too, already sells a wide range of third-party brands on its own website, ranging from the likes of Boden and All Saints to Nike and Calvin Klein. The retailer also revealed this week it is expanding its digital operations to enable it to act as a host for other retailers.

Next has created a new platform in order for it to run online operations, such as websites and distribution, for other brands, for a fee. It is essentially a white-label fashion service, in the same vein as Farfetch. Brands will have creative control over what their website will look like, but Next will do the leg work, including handling the back-end, as well as customer service operations (such as returns and call centres). According to the Telegraph, an unnamed retailer with sales of around 30m has already signed up to the platform.

It is considered to be a smart move from Next, particularly in light of the coronavirus pandemic, which has seen many brick-and-mortar retailers shut down. With many now relying on ecommerce, it could enable smaller brands to start selling online without worrying about high operational costs.

Not all online retailers will easily recover

Elsewhere, there are reports that online clothing retailers will be unable to bounce back as easily as Nosto’s figures suggest. Next is one retailer that has indicated it will recover slower than expected, predicting a 30% drop in full-price clothing sales this year. Already, Next has seen a 38% slump in sales since January, which included a month of no sales in stores and a short period of ecommerce closure.

Next has since re-opened ecommerce operations, but sales have also been in a limited capacity (due to staffing issues), resulting in online sales falling by nearly a third. This suggests that even if online sales do start to improve from March, losses from the beginning of the year are likely to have an overriding impact. This, combined with the wider impact on jobs and financial uncertainty for consumers, could mean further difficulties come May. It’s also important to point out that Next is a multi-category and multi-channel retailer, meaning that clothing and apparel is just one strand of its business (which could naturally see lower sales).

#TIP! If you're working from home, a dress that looks as good as it makes you feel is IDEAL for those back-to-back conference calls! ???? @keely_busby. #StayInWithNext

In the US, Target – which sells private label fashion brands – has reported that sales of clothing and apparel has dwindled in comparison to other categories like food and drink. In a statement, Target said that for the month of March, comparable sales declined “more than 30% in Apparel & Accessories.” Even worse, they were down more than 40% by 23rd April. It’s not clear how the categories compare in terms of solely digital sales, but overall, it indicates that clothing is not currently a priority for Target customers.

So what about online-only fashion retailers? Interestingly, considering that many suspended their ecommerce operations (to implement greater safety measures in warehouses), there have been some reported successes. Boohoo, for example, reported “improved year-on-year growth of group sales during April”, despite seeing a fall in March. This has been put down to the brand’s recent focus on loungewear, and a move away from the ‘going out’ style of clothing that it usually promotes.

Childrenswear is also proving to be popular, as parents look for alternatives to school uniform during the pandemic; Lovethesales.com has reported that sales of kids fashion is up 151% year-on-year. It will be interesting to see how ecommerce retailers who are currently relying on ‘lockdown appropriate’ clothing will fare in the coming weeks. There are some signs that luxury fashion could also see a turnaround when lockdown lifts; searches for luxury brands were up 27% year-on-year in the past fortnight, as consumers evidently start to think about life returning to normal.

The impact on customer experience

Ecommerce is proving to be a crux for retailers of all kinds at the moment, with certain categories faring better than others, and particularly within fashion. However, it’s also worth considering the pandemic’s impact on customer experience, and how a focus on CX might be key for sustaining momentum going forward.

Delivery and fulfilment is undoubtedly a key factor in customer loyalty, but one that is complex given the current circumstances. Customers undoubtedly still want the fastest and most convenient delivery option, however, they may want reassurance about safety (both in terms of deliveries and how brands operate). With most ecommerce retailers currently taking longer to fulfil orders, it is vital that retailers clearly communicate delivery times, as well as how they are striving to ensure customer needs are met.

Of course, it’s not just delivery that makes or breaks whether or not a customer will return. McKinsey suggests that retailers look to China as an example of how to utilise digital solutions for shopping during the coronavirus pandemic, with brands in China engaging customers through live-streaming on platforms like WeChat and Taobao.

For western brands, there are also big opportunities within social commerce and other forms of digital advertising. Despite a decline in adspend since the coronavirus pandemic – with predictions that the UK ad market will fall 16.7% in 2020 – online formats are predicted to decline less than traditional advertising. And at a time when consumers are more engaged with social and digital platforms, investment could (on balance) prove to be worthwhile in the coming months, particularly if campaigns are tailored and targeted to relevant audiences.

With social distancing rules likely to remain for some time, it’s certainly the time for fashion retailers to take a digital-first approach. 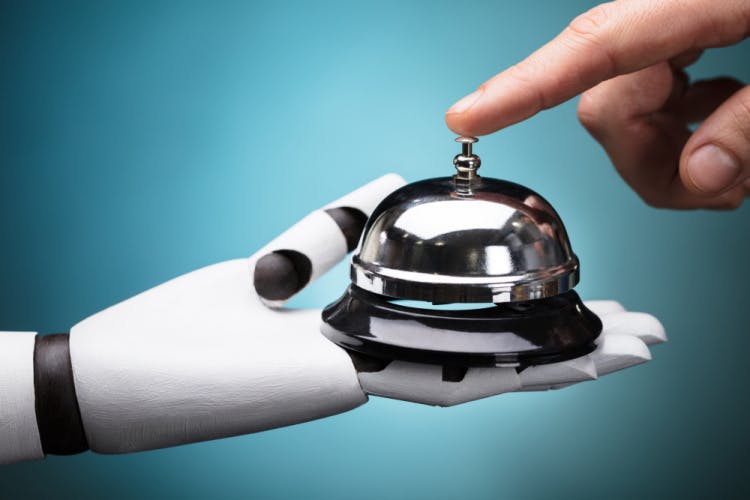 With countries around the world still in lockdown, it’s difficult to imagine a time when it is ‘business as usual’ for the hotel industry. 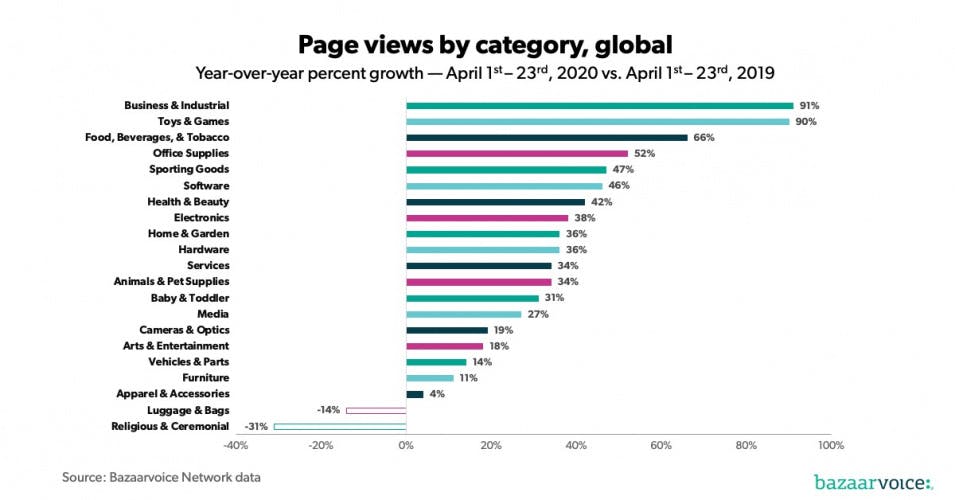 For the vast majority of businesses, the outbreak of Covid-19 and the lockdown that followed it has prompted an abrupt shift to digital. Brands that previously had a multichannel sales strategy in place have in many cases effectively become pure-play e-tailers, while companies that lacked an online option or a sufficiently robust digital business are […]