It’s February, and as such we’ve seen many campaigns centred around Valentine’s Day, and of course, the Superbowl which took place on the 7th. It’s also been a busy month for UK Twitter users, who among other things helped an unlikely breakfast and an explosive Parish Council meeting go viral.

The UK’s vaccination rollout is picking up speed, but anti-vax content remains rife on social media. To try and tackle this and encourage some of the more reluctant groups to take the vaccine, NHS England has created a new Covid-19 campaign with the help of a couple of very famous faces.

Shot as if it were an audition tape, the campaign video includes two national treasures, Elton John and Michael Caine, who are in their 70s and 80s respectively, speaking directly to the viewer about the importance of getting jabbed and that it’s safe and easy to do so. Elton John’s comedic attempts at acting, dotted with many references to his career, are soon abandoned in favour of Michael Caine’s superior performance (complete with his famous catchphrase ‘not many people know that’).

Uncommonly light-hearted in its approach, the ad has been shared far and wide over social media, and other channels, and has so far garnered a mostly positive response from the public.

In a launch statement on 10th February, Sir Simon Stevens, Chief Executive of the NHS, commented, “Well over nine out of ten people aged 75 and over have already taken up the offer of their NHS COVID vaccination, and now we want to encourage everyone in the high priority groups to do so. That’s why we’re grateful to Sir Elton and Sir Michael for helping the NHS promote vaccine uptake.”

Thanks @eltonofficial and @themichaelcaine for encouraging people to get the #COVIDVaccine. (Sorry it didn't quite work out, Elton.) ???? pic.twitter.com/m0BIzKIu1b

Twitter users were caught off-guard earlier this month by a tweet from cereal brand Weetabix which suggested a new, and rather bizarre serving suggestion – combining Weetabix with a tin of Heinz Beans.

Why should bread have all the fun, when there's Weetabix? Serving up @HeinzUK Beanz on bix for breakfast with a twist. #ItHasToBeHeinz #HaveYouHadYourWeetabix pic.twitter.com/R0xq4Plbd0

While the tweet itself was weird enough to gain some attention, containing little to no context or explanation, it was the response from other brands on the platform that has helped it accumulate more than 134k likes since it was first posted.

The tweet gained an overwhelming number of replies from official brand accounts ranging from supermarkets to fast food chains, dating apps, emergency services and tech giants, all looking to increase their reach, inject a little humour and (of course) obtain some likes.

Here are some of my favourites:

Babe are u ok? You've hardly touched your Weetabix and beans!

The Superbowl was a little different this year, but the battle of the ads remained a hot topic on social media. After a year of melancholic campaigns, following the events of 2020, many advertisers opted to lighten the mood with a humourous approach, including Bud Light.

In a spoof reminiscent of the many superhero movies that have graced our screens in recent years, Bud Light brought back a number of its most iconic ambassadors as superhuman characters, who are collectively dubbed the ‘Bud Light Legends’. The campaign saw them reunite to help a courier who had inadvertently upended his truck, dropping cans of the beverage everywhere and delaying delivery.

Originally aired during the 2021 Superbowl ad break, the campaign has since been rolled out on social media, gaining more than 120,000 views on Instagram and thousands of likes on Twitter, accompanied by a myriad of other content including GIFs, ambassador UGC and even a spoof blockbuster movie poster.

Another campaign that captured consumers’ interest during the Superbowl event also came from a big beverage brand – Mountain Dew. In an inventive cross-channel initiative designed to boost awareness of its new flavour (Major Melon), Mountain Dew encouraged viewers to count the number of bottles that appeared in its TV spot and tweet the brand with their guesses for a chance to win $1 million.

If the ad itself wasn’t engaging enough, with its bright colour palette, catchy soundtrack and a cameo from John Cena to boot, the added competition undoubtedly caught viewers’ attention. After the TV spot was reposted on Mountain Dew’s official Twitter account on the night, it received 15.9k likes and countless entries via the hashtag #MTNDEWMAJORMELON.

Mountain Dew even made the effort to reply to several wrong guesses with cheeky branded GIFs before announcing the correct number of bottles (243) on 17th February.

You did it! You counted! Was it correct? Stay tuned to see who wins at counting bottles of #MTNDEWMAJORMELON

The Weeknd vs. The Internet

Of course, who can mention the Superbowl without including the much anticipated half time show? This year, popular Canadian artist The Weeknd stole the spotlight, although perhaps for reasons none of us were expecting. The peculiar camera work during his performance, which mostly involved close-angled, dizzying shots of the singer’s face as he danced across the stage, became an instant internet sensation, prompting those on social media to do what they do best – make memes out of it.

This was certainly one of the most entertaining things to come out of the 2021 Superbowl, but there’s no doubt that it somewhat detracted from brands’ attempts to keep their campaigns front and centre.

my camera roll when I take my iPad back from a toddler pic.twitter.com/g0OqJLFpPH

what my pizza rolls see from inside the microwave pic.twitter.com/GavZzw7cQR

Pringles – Step Up The Spice

Creative agency We Are Social has worked with Pringles to develop a new socially-led campaign – Step Up The Spice – to promote its new offering named ‘Sizzl’n’, which contains three new Pringles flavours ranging from medium (Kickin’ Sour Cream) to extra hot (Cheese & Chilli).

Pringles’ promotional content has been rolled out across a myriad of social platforms, including TikTok, in the form of short looping video and striking photographic stills set to a black background with fiery special effects. The campaign aims to challenge consumers to test their taste buds by moving up the scale of spiciness.

To obtain further engagement, Pringles has also released a Snapchat AR filter for fans of the brand, allowing Snapchatters to take on a twist of the popular ‘Floor Is Lava’ challenge in which they need to reach a virtual tube of Pringles while avoiding the floor at all costs. Each level of the game becomes more intense, reflective of the varying intensities of the Sizzl’n flavours.

Walkers MAX teamed up with KFC this month to bring consumers KFC flavoured crisps. The campaign was fronted by a short advert which made an amusing comparison between the physical appearance of the Walkers ambassador Gary Lineker and KFC founder Colonel Sanders. Complete with the tag line ‘it makes sense’, referring to the obvious similarities in their appearances, the video features dynamic videography of Catford in South London as directed by Stormzy’s video director Rollo Jackson.

The campaign also marked Walkers’ first ever foray into TikTok Top View advertising, with the brand producing a vertical version of the ad for the app, as well as its first Twitter Spotlight takeover on 16th February. As an extra incentive, the partnership offers a 2 for 1 KFC meal with every pack of Walkers MAX x KFC crisps purchased.

Walkers and KFC weren’t the only brands pairing up in February. Dating platform Bumble partnered with Patch Plants to offer its users the chance to send someone one of a hundred ferns, for free, through the app.

More than ever, people on dating apps like Bumble are matching through a mutual love of houseplants, and they can be a great (and longer-lasting) alternative token of love or appreciation on special occasions. The ‘Love Fern’, as Bumble calls it, was first coined by characters from the classic film ‘How To Lose a Guy in 10 Days’, and the app brought the concept back to mark Valentine’s day after research showed the popularity of houseplants skyrocketed during 2020.

All Bumble users needed to do to take advantage of the offer was match with the official Patch Plants profile on the app. While the concept is relatively simple, it’s a great way to increase in-app engagement and remind users that small, meaningful gestures often make the biggest difference, especially in times like these.

A post shared by Bumble UK and Ireland (@bumble_uki)

March marks the return of the UK Census. To increase awareness of the event, and encourage the population to take part, Census 2021, with help from M&C Saatchi, launched a campaign spanning across social media, TV, radio and OOH in no fewer than 44 languages.

Focusing heavily on inclusivity and diversity, the campaign advert and complementary photographic content features nearly 200 UK citizens from all walks of life posing in front of a purple backdrop with the tagline ‘It’s about us’.

Aside from the different communities involved and represented in the project, the government has attempted to push the 2021 Census as a chiefly digital-first event for the first time in its history, hence the greater output of campaign-related content on its digital platforms this year.

Speaking to Campaign, Ben Golik, Chief Creative Officer at M&C Saatchi explained, “To encourage people to complete the census, we needed to make it meaningful to them, which is why our creative focuses on community and the impact that census data can have on all our lives…

“The work has a sense of measured optimism, which we hope feels appropriate for the challenging times we’re living in.” 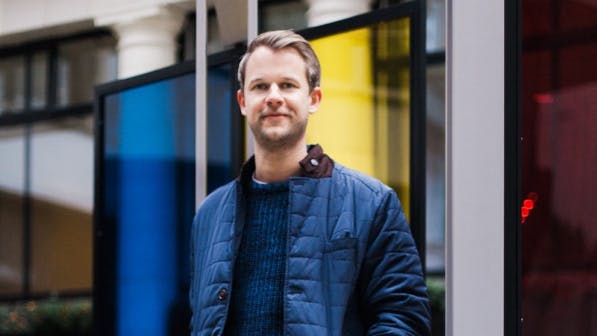 Today’s ‘Day in the Life’ features Rob Bridgman, the CEO and founder of ‘sofa-in-a-box’ company Snug. We caught up with Rob to find out how the pandemic has impacted his day-to-day role, as well as some of his predictions for the future.

The acceleration of ecommerce throughout the globe over the course of the pandemic has been hard to ignore, as consumers shopped online often out of necessity, and brands were forced to rapidly change their strategies as a result.