Print travel brochures are now rarely-used for holiday research. Instead, the majority of people head online to search and discover travel inspiration (long before they even think about booking).

Recent research from Easyjet even found that 55% of 18 to 65 year olds have booked a trip based on images they’ve seen on Instagram.

Naturally, it’s becoming even more important for hotel and hospitality brands to stand out from the crowd. Content marketing remains a key way for hotels to do this, typically being used to grab attention and engage users throughout their online journey.

Here are some recent examples that have caught our eye, and the reasons why they work.

Pet-friendly hotels are becoming increasingly popular; appealing to travellers who can’t bear to be parted with their beloved pets. The Hoxton Hotel group is one such hotel brand, having recently made all of its properties dog-friendly.

In honour of this, the hotel has created a website hub just for dogs, too. 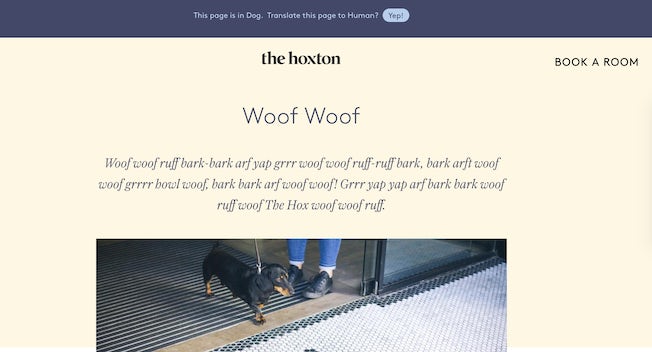 This means that it has created a dedicated page ‘in dog’ language, along with the option to ‘translate to Human’. If humans do indeed want to, they can click and scroll to discover all the information they need about booking and staying at the hotel with their pooch.

Including cute canine designs – created by illustrator Alice Bowsher and Ennismore Design Studio – it is a simple but amusing project, and one that showcases the hotel group’s sense of fun and welcoming nature. 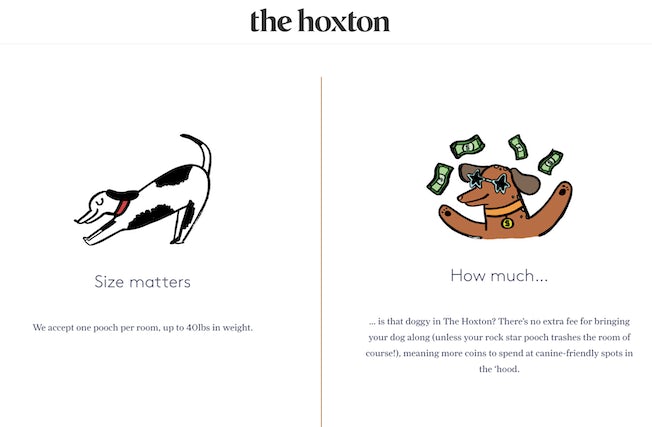 According to figures from Adobe, podcast mobile app usage surged by a whopping 60% from January 2018 to May 2019, with 45% of those polled planning to listen to more podcasts in future. Naturally, an increasing number of brands are entering this space – including those in the hotel and hospitality industries.

Marriott Bonvoy is one of the best examples, using the medium to build relationships with its loyalty club members (which recently combined that of Marriott Rewards, The Ritz-Carlton Rewards, and Starwood Preferred Guest (SPG). 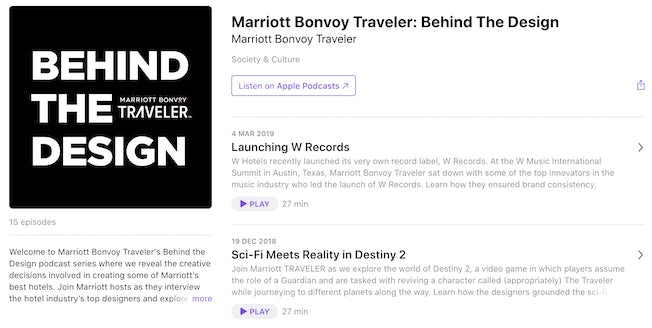 Its podcasts focus on niche but relevant topics to engage regular visitors to its hotels. Case in point: ‘Marriott Bonvoy Traveler: Behind The Design’, which delves into the creative decisions involved in building and designing some of Marriott’s top hotels. Featuring some of the hotel industry’s most well-known designers, it offers listeners an in-depth look at both the hotel industry and interior design in general.

Not everything in Old City #Philadelphia is old. Here's where history meets contemporary cool: https://t.co/RZx54DX5o7

Airbnb is no short of quirky rental accommodation, but it has recently taken this one step further with a number of novelty (and well-known) listings.

In October 2019, the Barbie Malibu Dreamhouse popped up on Airbnb, with the ad promoting it for a two-night-stay.

The listing appeared to be written by Barbie herself, detailing why the dreamhouse has always been her ‘favourite place to call home’. As it turned out, the listing was part of a celebratory campaign for the 60th anniversary of Barbie, and a partnership with manufacturer, Mattel. 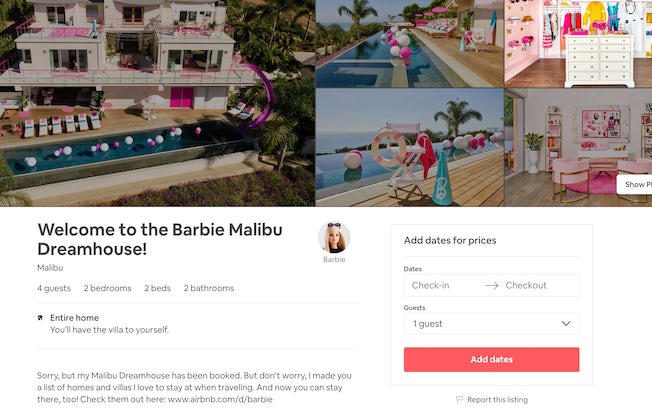 As well as Barbie, Airbnb has also created listings for other iconic lodgings, such as the famous Wienermobile and a century-old cottage on the Jim Beam’s distillery grounds.

While some of these examples are real – actually offering guests a stay in the locations advertised – it’s mainly just a way for Airbnb to generate interest (and headlines) on the back of unique and amusing content.

While virtual reality has been touted as a gimmicky marketing ploy by some, the technology can provide real value for consumers – particularly when it comes to researching travel. This is because it allows people to visualise places in a much more immersive (and therefore realistic and compelling) way.

This was the thinking behind Best Western Hotels’ VR tours, which allows potential visitors to have a nosey round its hotel suites. The videos are available to view in 360-degrees, with the added element of virtual reality for those watching with headsets. Users get a sense of the size and scale of the room, even the texture of furniture and other design features. With consumers often spending lots of time finding out this information on hotel websites, the VR videos provide it in a way that’s instantaneous and easier to digest.

Of course, the content relies on people owning headsets in the first place (or viewing it in a context where they’re accessible). However, while the market is small for now, research suggests that interest in VR from a consumer perspective is growing. In a survey, Greenlight VR found that travel, tourism, and adventure is number one category of interest, cited by over 70% of respondents.

Consumers now expect more from a hotel than just a comfortable night’s sleep. This means that hotel brands are now marketing the experience that their hotel affords – on top of basic amenities, price, and convenience.

User generated content is a particularly effective way of doing this, as it helps to bring to life these experiences, showcasing them from the perspective of fellow travellers.

Shangri La Hotels and Resorts is a good example, recently launching its ‘My Shangri La’ campaign, which is built around user generated content.

The campaign involves users taking pictures of their ‘Shangri-La’ moments – i.e occasions of ‘unexpected joy and happiness’ – and sharing them on Instagram and Weibo. To incentivise users, the campaign also includes a competition element, whereby winners will receive free stays at one of ten Shangri-La hotels.

*COMPETITION TIME* "The best things in life are not things, they’re moments”…and we want to see yours! If you have captured precious moments in our hotel, share, tag and add #shangrilamoments to your photo and be in with a chance to win an afternoon tea experience at our hotel ???? @latravelgirl #shangrilalondon5

Most of the campaign images highlight the decadence and luxury found in Shangri-La hotels, effectively evoking travel inspiration and wanderlust in fellow users.

Thanks (or no thanks) to social media, we are more aware of other people’s holidays than ever before. Hotels.com cleverly recognises the behaviour that stems from this in its ‘Be There. Do That. Get Rewarded’ campaign, which parodies the experience of ‘hate-liking’ someone else’s photos. In other words: ‘liking’ it, but really wishing that it was you instead.

The campaign involves a number of short-form video spots – rolled out on the brand’s digital channels – showcasing a variety of ‘hate-like’ scenarios. For example, the woman who wishes her water was wine from Sonoma, or a man who wishes his domestic flight seat was a swing in Bali – both travel photos seen on social media.

By placing these ads on social media, Hotels.com cleverly showcases a bit of irony, targeting people who might be partaking in the same ‘hate-like’ behaviour it is parodying.

In 2018, Gleneagles hotel in Perthshire launched a fine foods and leather goods range (under Gleneagles & Co), allowing visitors to take a small part of the Gleneagles experience home with them.

In order to promote the range, the company created a number of short videos to showcase the work and lives of the craftsmen, designers, and artisan producers behind it.

Proudly celebrating Scotland, the series gives viewers a real insight into the artisan industry across the country. At the same time, it allows Gleneagles to highlight its own proud heritage, and promote its expansion into other areas of the hospitality industry.